A new CS-Cart module of geolocation detection allow you to dispose of annoying popups of the default geolocation. This module using the Sypex Geo service and will work all over the world.
When user comes from city that is not in database, it saves to separate database. Also when you select a city you can show a notification with short info about this city.

Features:
- Ability to turn off city detection popup in module settingsâ€‹
- Auto adaptation to current color scheme
- Ability to set any link to each city
- Beautiful popup when city detected first time
- Integrates with the "Cities" module of the CS-Cart Russian Build. No need to fill Russian cities
- Auto detection of the city, even if it is currently not in database
- New auto detected city adds to a separate database
- Ability to show short info about the city in created block or default notification
- Ability too add favorite cities to the city selection list
- Ability to search city in the sity selection list using AJAX
- City at the checkout page fills automatically 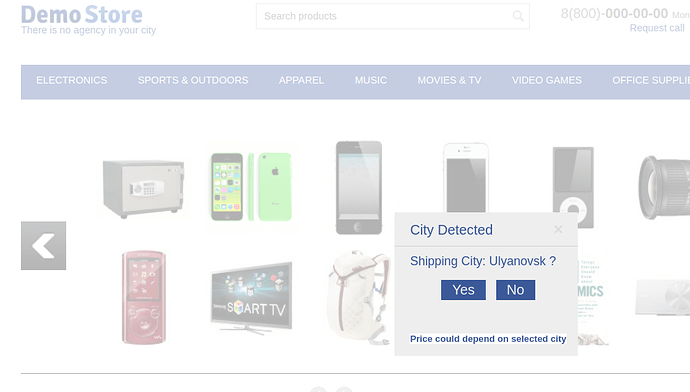 New version of this module is released. Fixed all bugs, changed design, made auto adaptation for the color scheme, added a link for each city and ability to turn off city detection popup in module settings.

One more new version. We changed the locating functionality. Now it works correct and shows the correct city.

New version is released. We removed auto redirect for city detection and made a check for crawlers.

If you already bought it, please, update to the latest version.

Hello. We have relised a new version that saves current query URL on city change.