For the life of me I cannot locate this file and correct it.

Thanks for your time.

well the file does exist…

Is what you pasted above the literal error or did you add the {$images_dir)?

Forgive me for stating that I could not find this file. Yeah, I created one thinking that might do it. Nottttt!

here is the entire error message copied from the log

{$images_dir} causes just a bit of confusion for me as well.

possibly your (“alt=”) tag is causing the problem 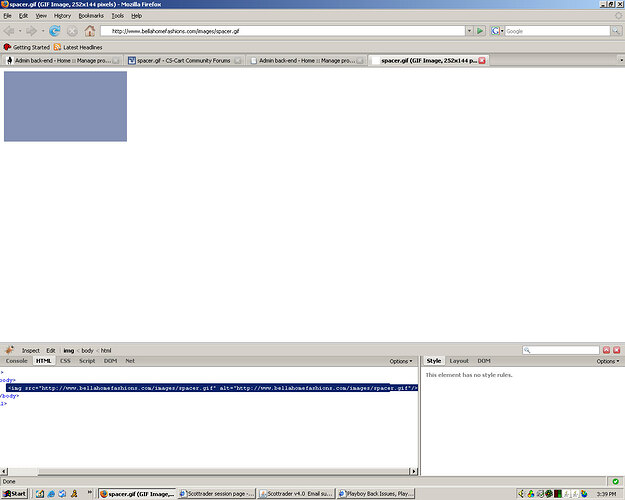 My question is why would the error log still contain “{$images_dir}” - shouldn’t that already be translated to the variable value by the time it gets to the point of trying to access the file? …?

Is this possibly some hand-tweak to a template file or something, that has gone awry?

Thanks but I’m not sure what to do with your suggestion.

How might I alter the (“alt=”) aspect of the file?

Thanks but I’m not sure what to do with your suggestion.

How might I alter the (“alt=”) aspect of the file?

truthfully, I am not even sure how the alt= tag was even filled in in the first place…

I may be wrong, but i thought all the alt= tags were NOT filled in by default…

(as usual, I may be wrong, I looked at mine and they are all “empty”

Yeah, the alt tag is probably not at the root of your issue because the file is there and displaying fine…Browsers shouldn’t care what is between the " " in the alt tag.

The issue really has to do with why that smarty code is showing up in your error logs…it shouldn’t be. Are you only hosting CS code in that directory or have you added pages as well? Somewhere along the line that piece of smarty is being passed literally and not being processed. Also, what’s strange is the path…if you look at how CS does image paths, that wouldn’t be the default way…normally it would have something like /skins/…/…/images/file.gif.

It has to be from someplace you copied in some code or tried to add an image??

I agree with what BHolland said…

it makes a lot of sense…

Thanks for your asssistance.

All pages were created with CS.

As far as the path, the structure on the server has remained unchanged as far as what I have done/know.

Some tpl files have been altered for things like google analytics, perhaps I copied some bad code somewhere.

I found this line in my “main.tpl” file

yes…these “spacers” are used within the tables to separate…

they are sized according to the pixel width

IF the spacer.gif did not exist in the image gallery until you put it in there today, then each time it calls for it, it would give you the error

however, that still doesn’t answer the {image} line being in the error log

if you want to see what it does, make a BLACK spacer.gif temporarily, and then view your page(s)

A really easy (and not the smartest) wat to test would be to adjust all your spacer names and see what shows up in the error logs…probably not the best plan as I’m sure there are spacers littered all over the .tpls. None of what you posted looked strange though…

Okay, I think I found the problem:

That JS file is calling:

Edit: It actually calls it twice, but it’s the same issue…

I made a mistake in the past for the same reason I don’t advocate removing the line.

Reason being js_menu should be the file reference to the e_menu your mentioning. (located in js_menu?)

Why is there smarty in that JS file anyways?

You just need to make sure the path is correct, wherever you put the spacer.gif

Should I re write the path in jscookmenu…

Where should the spacer.gif be? I put one in the images dir and even changed the color to black. I can’t see it on any of the pages so I’m assuming it is not the correct file to begin with.

It does not appear to be causing any issues except eating up bandwidth (29000 hits and 37mb) so far this month. Maybe I should just leave it alone.

Thanks for your time.

Don’t be afraid, you can’t break it that badly

Yes, you should rewrite the path in that JS file. It doesn’t really matter where the spacer is as long as it exists. So, to be consistent you should probably use the same CS image:

Give that a try and let me know if it keeps the errors out of your logs.

i’ll give it a try

I would have thought the problem was because the path was supposed to be set to the relative skin path, that is images folder under your skin…

…but since the error returns this absolute path:

I don’t know what to think, since the image is there… A dirty solution, that don’t make much sense to me but would work is to change all references to

to something else, or a non-dynamic, absolute path. But again, I don’t see the point in it as this should work. Don’t you have some couple of days support left to ask them to fix it for you? This is so minor they wouldn’t charge extra…